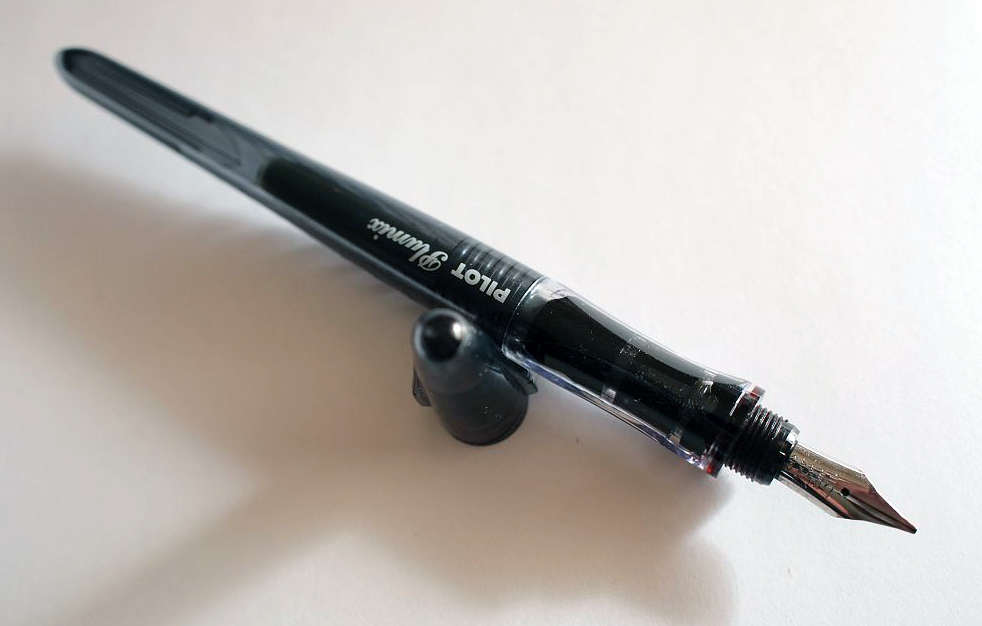 There’s no getting around it, the Pilot Plumix is one weird pen. Sold in big box department stores (I think I got mine at Target), the Plumix is a cheap, way entry-level pen. With its weird body and odd choice of nibs, though, it’s hard to know who the pen is intended for.

The Plumix’s body is long and tapered, like a paintbrush handle or dip-pen holder. There is no visible differentiation between the body — made of hard smoke-grey plastic on mine, but it comes in blue and purple, too, I think — and the writing section, although there are two Lamy Safari-style cutouts that guide where your fingers are meant to go. (People who hate this on the Lamy will hate it here, too.) The pen body isn’t quite straight, it has a kind of belly on the underside, just before the section. Most strangely, the screw-on cap only covers the nib, putting it all out of proportion with the rest of the pen. The tiny cap posts, at least, making it slightly less likely you’ll lose it (if you don’t mind that the pen looks ridiculous with the cap stuck up there…). 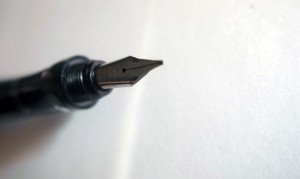 The Plumix comes with an italic nib, medium width. While some people love italics, it’s a strange choice for a mass market pen — the flat chisel tip and sharp-ish corners make the pen somewhat difficult to use and take a while to get used to. On smooth, ink-friendly paper it can be comfortable, but on the kind of paper most of us have around our homes and offices, the pen will drag and dig in, making for a pretty lousy experience.

The Plumix is a tough pen to love, but if you enjoy the nib and aren’t put off by the unforgiving hard plastic section and odd design, the writing works are well made. The nib and feed are removable and can be swapped with other pens in Pilot’s budget range, including the Metropolitan. The pen takes Pilot’s Namiki cartridges, or can be fitted with a CON-20 squeeze converter or CON-50 piston converter and loaded up with bottled ink. I’ve done both, and both work well (the hand-written review is with a Namiki cartridge). Because the nib/feed assembly is designed to be removable, it turns quite easily (just grab the nib with your fingers and twist somewhat hard) which makes it possible to adjust the angle relative to the finger cut-outs in the section. I prefer to write with the nib parallel to the paper, which technically isn’t really italic. Whatever — my pen, my rules!

In the end, the Plumix is a cheap oddball — if you find a use for it, great; if not, well, it’s only a few dollars lost. I can’t figure out what to do with mine — just writing this review has made my fingers sore, so it’s never going to be an everyday writer for me — but I keep not throwing it out or giving it away, so there’s SOMETHING about it that resonates with me. Maybe it’s just the fact that it’s such an ugly duckling that I feel sorry for it… 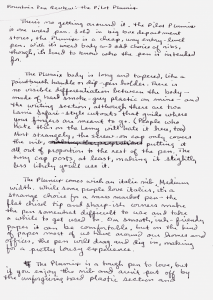 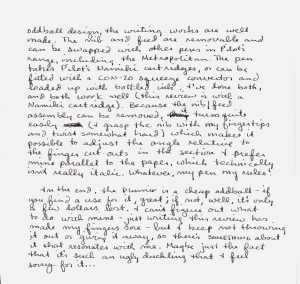