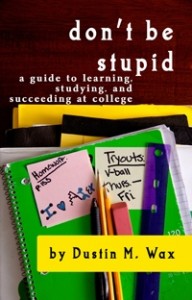 Last month, I completed a project I’ve been working on for quite a while, a book of advice for college students called Don’t Be Stupid: A Guide to Learning, Studying, and Succeeding at College. The book grew out of some of the frustrations I’ve had as a university instructor over the last five years, and offers advice on time management, essay-writing, studying, and generally getting the most our of your college years.

I started writing the manuscript at the end of last year, but set it aside when the Spring semester of this year turned out to be a little more than I could manage. I finished a few chapters during Spring Break, and finished it up during my summer vacation. In the end, it came out at just shy of 20,000 words – not all that long for a book, but good for the kind of audience I’m trying to reach: young, academically-inclined but probably overloaded with required reading and other work, anxious to do well but not appear to be trying too hard, someone looking for some quick advice that’s direct and to-the-point.

Over the next several weeks, I’m going to be visiting some of the tasks that I performed in the writing of the book. Since the book is self-published (I figured it was too short to make it as a commercial offering, although if there’s enough of a demand I might approach publishers with a greatly expanded 2nd edition – the nice thing about writing for college students is that the market refreshes itself entirely every few years) bringing it to market involved writing it, editing it, laying it out, designing the cover, compiling the book in both an e-book format and a format that could be printed, selecting a POD publisher, and marketing it (which is where I’m at now).

At each step of the way, I’ve used a variety of different tools, including:

I want to write about why I chose each of these tools, how I used them, and the problems they presented (when relevant). This won’t be a formal series; instead, I’ll be writing loosely related posts on topics that arose in the writing, publishing, and marketing of the book, touching on various topics as they occur to me.

If you have any questions you’d like to see addressed, please feel free to email me or leave comments on this post – I’m sure I can’t anticipate every possible question that someone might have about this process.

I will, of course, be writing about the kinds of things I usually write about, as well. I have a bunch of tools I want to write up, and am wrapping up a series on capturing and organizing ideas that should go up in the next week or two. I’m also working on setting up a guest host for the site for a week or two while I move, probably at the beginning of next month.

(Speaking of which, a couple of people have written me about contributing a post or two; I’ve been so swamped getting this book finished, really pushing my freelance writing, starting a new semester as an instructor, preparing for the move, and doing everything else I’ve somehow taken on that I haven’t been really good about replying. If you haven’t heard back from me, drop me a line again and let’s see what we can arrange.)

I’m also trying to think of some way of participating in National Novel Writing Month, which is in November. I’m not a novelist, or a fiction writer in any sense (someday…) but I’m a big fan of NaNoWriMo, and I’d like to come up with a way to take part in the excitement without actually writing a novel, since I don’t write novels (and have the whole “writing 50,000 words in a month” thing down pretty much pat already). If you have any ideas, shoot me a line.