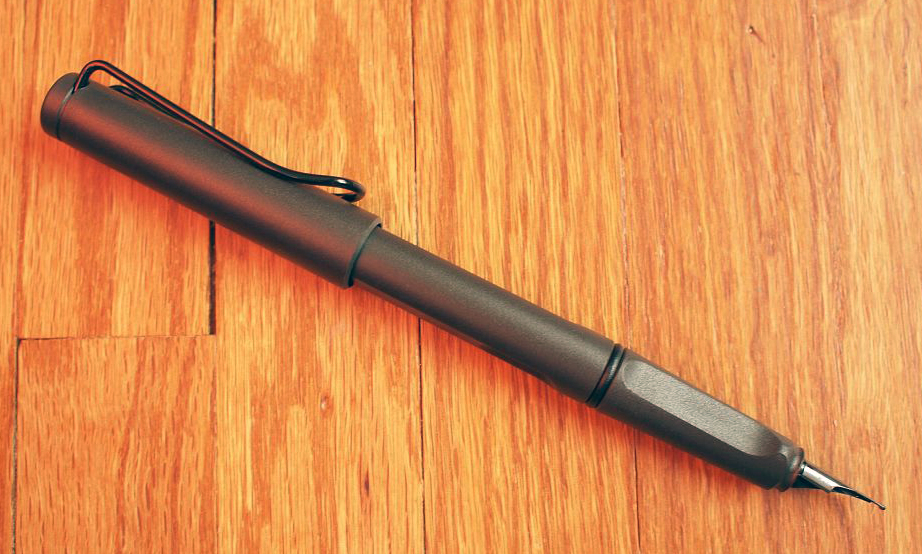 Let me cut straight to the chase here: I DESPISE THIS PEN. 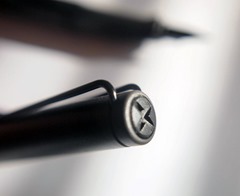 After buying my second Pilot Metropolitan, I thought I’d check out the OTHER “budget” pen everyone raves about the Lamy Safari. To be honest, I never much liked the look of the Safari — with its plastic body, wire clip, and vaguely military tactical aesthetic, I thought it looked cheap and utilitarian (and not in a good way). But people seem to love it, and I figured, if it writes well, who cares what it looks like?

It does not write well.

I ordered a broad nib because I had just gotten a bottle of Noodler’s Apache Sunset and I thought a broad nib would show it off well. Of course, to use bottled ink, I needed to order a convertor too, which took a while to arrive after the pen was already here. So, eager to play with my new toy, I loaded up the included blue ink cartridge.

This pen is dry, chalky even. I could never get a clean line flowing with the cartridge. I washed and washed and washed again the nib and feed. I looked at the nib under a magnifying glass to see if the tines were aligned (they are). I drew a thousand figure eights on a brown paper bag in hopes of smoothing the tip. I removed and reseated the nib over and over.

Nothing made this pen write well.

People complain about the section — its triangular cross-section is supposed to help students learn the correct grip on the pen, but for me, that’s the driest way to hold the pen. If I kind of hold it at a right angle to the page, I can get enough ink to flow for a decent line, though it’s still like dragging chalk.

I had hoped it was just the ink, but refilling with Apache Sunset made it even worse. So I tried Diamine Ancient Copper (another ink that comes into its own with a broad nib) — not better. The handwritten review is written with Noodler’s Red Rattler, an ink that’s supposed to have lubricating properties, which I thought might help but… no. It’s dry, it railroads, it feels AWFUL, and it looks ugly.

This is not a pen I plan to use again. I won’t even give the Lamy Safari away, because there’s nobody I dislike that much. And thus ends my foray into the world of Lamy pens. 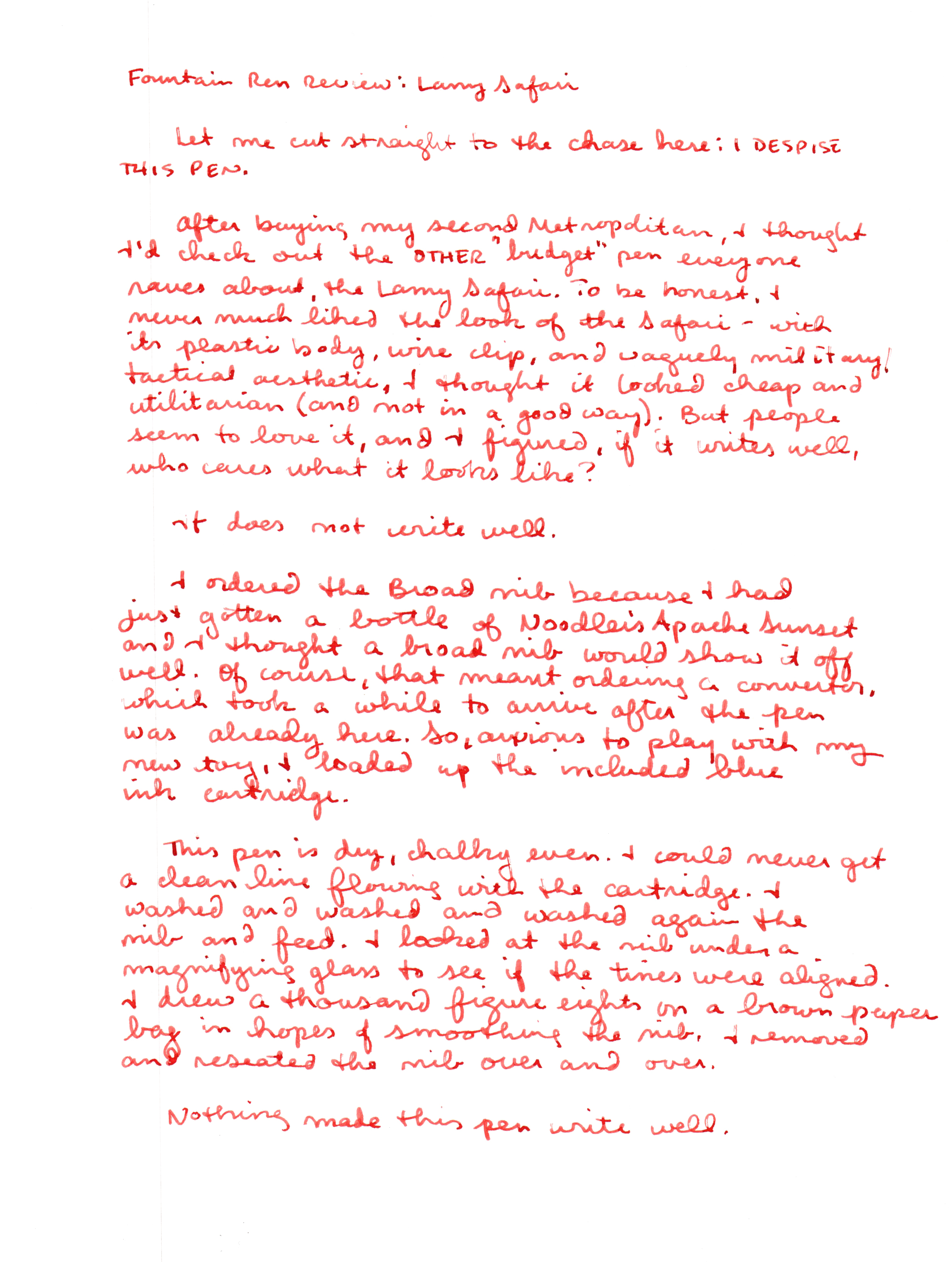 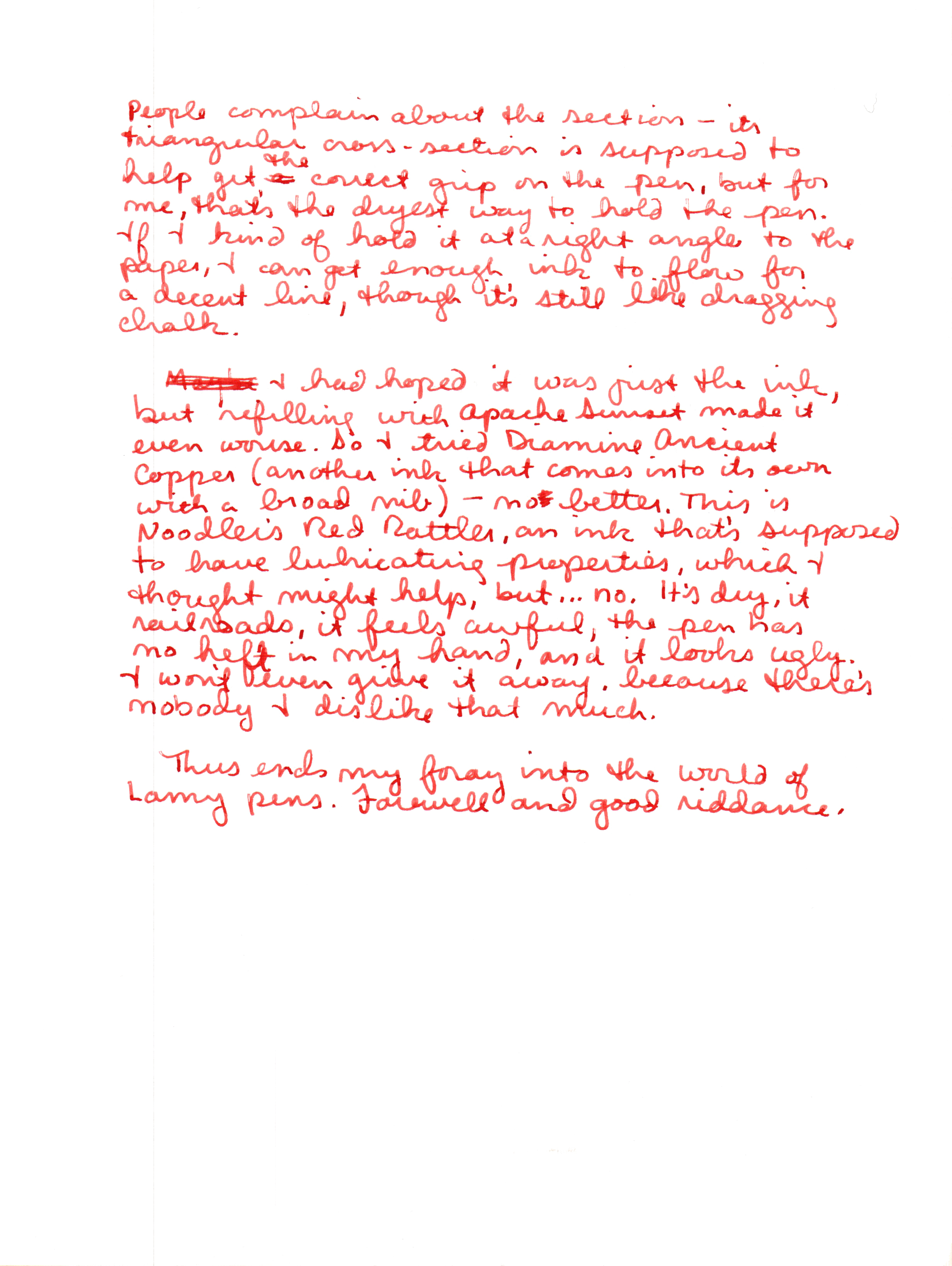